Megan comes to the URC after 20 years of working in the arts, for 13 years at Chapter Arts Centre and latterly as a freelance consultant to a range of organisations from National Theatre Wales and Wales Millennium Centre, to small companies and individual artists. She has worked primarily in marketing and communications, but also has a wealth of experience of organising and running events and producing theatrical tours.

Megan’s mam is the Revd Dr Kathryn Price, recently retired as minister of the Alun Vale pastorate in North Wales. In her spare time, Megan enjoys the theatre, reading and binging a good sci-fi series. She is excited to be part of the Synod Office team. (And she doesn’t mind if you call her Meg!) 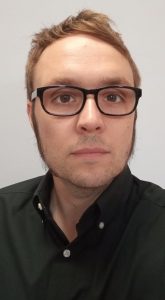 Joel graduated from the University of Wales Lampeter with an MA in European Philosophy in 2007, and began working at City URC shortly after. His time at City URC allowed him a wide range of experiences but he most enjoyed spending time welcoming and helping the many refugees who were coming to call Wales their new home.

In his spare time Joel is a keen reader and amateur musician, but his true passion is for listening to music which is as near to an addiction as he could manage.